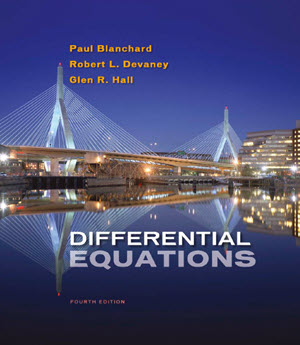 Incorporating an innovative modeling approach, this book for a one-semester differential equations course emphasizes conceptual understanding to help users relate information taught in the classroom to real-world experiences. Certain models reappear throughout the book as running themes to synthesize different concepts from multiple angles, and a dynamical systems focus emphasizes predicting the long-term behavior of these recurring models. Users will discover how to identify and harness the mathematics they will use in their careers, and apply it effectively outside the classroom.

Paul Blanchard is Associate Professor of Mathematics at Boston University. Paul grew up in Sutton, Massachusetts, spent his undergraduate years at Brown University, and received his Ph.D. from Yale University. He has taught college mathematics for twenty-five years, mostly at Boston University. In 2001, he won the Northeast Section of the Mathematical Association of America's Award for Distinguished Teaching in Mathematics. He has coauthored or contributed chapters to four different textbooks. His main area of mathematical research is complex analytic dynamical systems and the related point sets, Julia sets and the Mandelbrot set. Most recently his efforts have focused on reforming the traditional differential equations course, and he is currently heading the Boston University Differential Equations Project and leading workshops in this innovative approach to teaching differential equations. When he becomes exhausted fixing the errors made by his two coauthors, he usually closes up his CD store and heads to the golf course with his caddy, Glen Hall.

Robert L. Devaney is Professor of Mathematics at Boston University. Robert was raised in Methuen, Massachusetts. He received his undergraduate degree from Holy Cross College and his Ph.D. from the University of California, Berkeley. He has taught at Boston University since 1980. His main area of research is complex dynamical systems, and he has lectured extensively throughout the world on this topic. In 1996 he received the National Excellence in Teaching Award from the Mathematical Association of America. When he gets sick of arguing with his coauthors over which topics to include in the differential equations course, he either turns up the volume of his opera CDs, or heads for waters off New England for a long distance sail.

Glen R. Hall is Associate Professor of Mathematics at Boston University. Glen spent most of his youth in Denver, Colorado. His undergraduate degree comes from Carleton College and his Ph.D. comes from the University of Minnesota. His research interests are mainly in low-dimensional dynamics and celestial mechanics. He has published numerous articles on the dynamics of circle and annulus maps. For his research he has been awarded both NSF Postdoctoral and Sloan Foundation Fellowships. He has no plans to open a CD store since he is busy raising his two young sons. He is an untalented, but earnest, trumpet player and golfer. He once bicycled 148 miles in a single day.

This was the required book for my calculus 4 class which was a combination of linear algebra and differential equations. My professor did not actually use the book all that much so I honestly did not use it as much as I used other books in other classes. This is definitely a different kind of textbook. It does not really jump right into the theory and then problem sets like most books do. Instead, it almost reads like a novel, then starts getting into theory and examples, then has the problem sets after that. I am not exactly sure how I would have felt about that style had I needed to use the book more. In the differential equations portion of the class my professor basically taught from his own notes and made up his own problem sets, so this was more ancillary to the class. I remember thinking that it was kind of an odd way to set up a math book when I did read it until I discovered I could follow along with what my teacher was saying without having to consult the book. If you are in a class and your teacher does rely on the book heavily you may need to get some kind of study guide to go along with this, depending on how well you can understand how it presents the material.

Want to join the discussion?
Feel free to contribute!